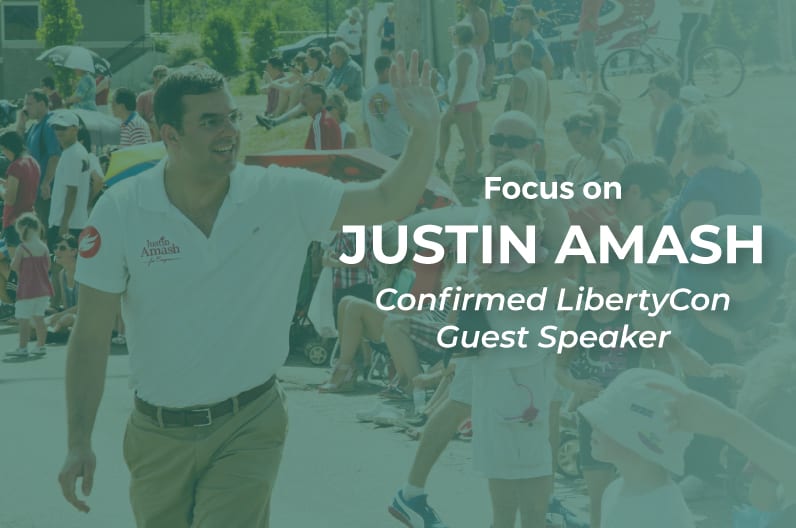 Independent Member of the U.S. House of Representatives for Michigan’s 3rd congressional district, Justin Amash, is confirmed to be a guest speaker at Students For Liberty’s annual LibertyCon, which will be held in Washington, D. C. on April 3-5, 2020.

Justin Amash is known for his advocacy of pro-liberty ideas on a range of issues. After parting ways with the Republican Party in July 2019, Amash, a self-described libertarian, is the only Independent in the House of Representatives, where, according to his website, views himself as the ‘leading advocate for government restraint’.

Amash has stated that limited government, economic freedom, and individual liberty are his core values which inform his votes in the House of Representatives, where he is recognized as having a strong commitment to upholding the Constitution and the rule of law. He has also credited Frédéric Bastiat and Friedrich Hayek as major influences on his political thought.

Throughout his political career, Justin Amash has recognized the threats posed by excessive government spending. He has put forward policies aimed at preventing overspending, balancing the budget, as well as arguing for a simplified tax code.

During his time in the Republican Party, Amash was known for frequently disagreeing with his fellow party members on a range of policies. He has consistently advocated for decreasing military spending and is a fervent opponent of NSA anti-terrorism measures involving mass surveillance. He also dissented on matters such as immigration policy, having opposed measures to redirect and increase funds for a border wall, while also opposing Donald Trump’s executive order for a travel ban on citizens of seven Muslim majority countries.

As well as being an outspoken defender of civil liberties, Justin Amash is also a fervent advocate for greater transparency in politics. He posts explanations of his voting rationale online and is in favor of introducing a new independent procedure for the delineation of districts in order to combat political gerrymandering.

Amash’s differences with the Republican Party culminated in him becoming the first Republican lawmaker to advocate for the president’s impeachment, in May 2019. Shortly thereafter, he left the party and became an Independent. Subsequently, he voted in favor of an impeachment enquiry, the only non-Democrat to do so. Likewise, in December 2019, Amash was the only non-Democrat to vote for either article of impeachment.

Justin Amash can certainly be regarded as one of the most prominent advocates for pro-liberty ideas in American politics, and we look forward to his contributions to the free marketplace of ideas at our annual LibertyCon.

If you are interested in the unique opportunity to hear Justin Amash’s talk in person, along with our many other fantastic speakers, please click here to book your LibertyCon tickets.

We look forward to you joining us in Washington D.C. on April 3-5, 2020. For more information about speakers, travel, and our program agenda, please visit LibertyCon.com.

To save 30% on LibertyCon tickets, enter the code ‘AMASH’ at checkout.