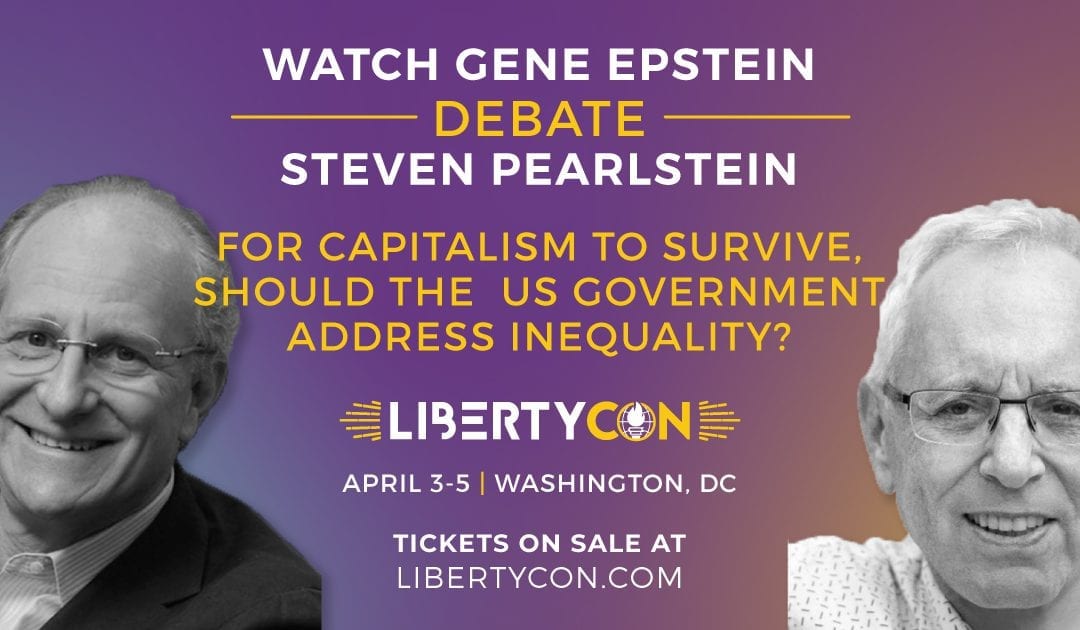 Debate: For capitalism to survive, should the US government take a more proactive role in directly addressing the problem of inequality?

In Washington D.C., on April 3-5, 2020, Students For Liberty will host the most significant non-partisan, pro-liberty gathering of the year, LibertyCon!

Over 1,000 students and alumni are expected to attend a series of talks and debates delivered by our lineup of guest speakers. The conference will cover a wide range of topics relating to the ideas and values of liberty, while also offering excellent networking opportunities.

One of the debates taking place at LibertyCon will be held by Gene Epstein and Steven Pearlstein, and will explore the question of whether the US government should take a more proactive role in directly addressing the problem of inequality.

Gene Epstein, an economist, is the current director of the Soho Forum, having previously served as the economics editor of Barron’s Magazine for 24 years. He has experience as a senior economist for the New York Stock Exchange and is the author of several books, including Econospinning, published in 2006. A follower of the Austrian school of economics, he is also an associated scholar at the Ludwig von Mises Institute in Auburn, Alabama.

Steven Pearlstein, recipient of the Pulitzer Prize for Commentary in 2008, is a columnist specializing in the fields of business and economics. With extensive experience as a journalist, editor, publisher and television news reporter, he has also been a Professor of Political and International Affairs at George Mason University since 2011. After having published Can American Capitalism Survive?, in 2018, he has recently released a new book, Moral Capitalism: Why Fairness Won’t Make Us Poor.

It is evident that, although a longstanding issue, the topic of inequality has become an increasingly prevalent topic in the political discourse over recent years. Given the current context, this discussion between these two highly knowledgeable speakers will provide a welcome opportunity to examine various arguments surrounding the nature of inequality and the role of government therein.

The theme of this debate can generate a variety of questions and different perspectives on matters such as the track record of governments in terms of mitigating inequality. This represents a chance to consider the evidence for greater economic freedom, enabling billions of people to overcome extreme poverty in the past couple of centuries, as well as the prosperity created in those countries where the principles of free markets have been embraced.

Finally, a crucial set of issues this topic raises is whether inequality of outcome is something problematic that requires government solutions, whether these attempted solutions can actually lead to an optimal outcome for all concerned, and whether this represents a legitimate role of government or instead, state overreach.

If you are interested in joining us for this fascinating discussion, along with many other highly engaging talks around the issues affecting individual liberty and economic freedom, you can register here for LibertyCon.

We look forward to seeing you there!